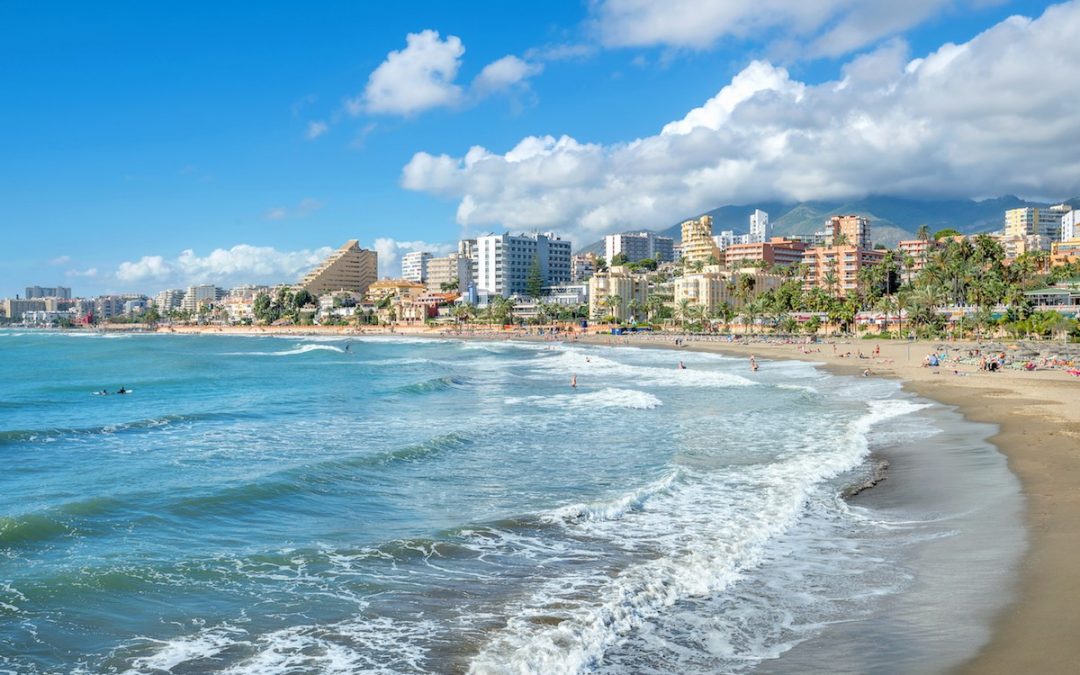 Why we love Benalmádena

Benalmádena is one of the Costa del Sol’s most popular holiday destinations, and it’s easy to see why. Just a short 15-minute drive from the Málaga airport, the resort has over 10kms of sandy beaches, a vibrant town centre and lots of attractions; including Tivoli World, Selwo Marina, Sealife Aquarium Butterfly Park and even a cable car.

What’s it like?
The town has 3 different personalities; there is the Benalmádena Costa, Arroyo de la Miel (the business district) and Benalmádena Pueblo, where you’ll find the white washed traditional houses and winding streets. If you want to party, head to the famous Arabic style award-winning Puerto Marina which has been voted the best marina in the world several times, where you’ll find shops, bars, restaurants and clubs. It is also a residential area with floating islands and there are over 1,000 moorings. Solymar Square is the other main entertainment centre, which is popular with all ages, whether strolling through the new shopping centre, sipping a coffee, taking a walk or partying ‘til early in the morning. This being the Costa del Sol, there are several golf courses, hotels and a casino and a casino, where you can enjoy a meal and a show.

Eating and drinking
As befitting a coastal town in southern Spain, Benalmádena has a wide selection of restaurants, including many specialising in the healthy, Mediterranean cuisine, particularly the delicious region paella. The area are the marina, has a good range of fresh fish restaurants, and you’ll also find every other type of food, from Argentinian steaks to Middle East, Indian, French and Italian.

Nightlife
Benalmádena has a rightly deserved reputation as one of the best places to go out drinking and dancing on the Costa del Sol. Revellers tend to head down to the Puerto Marina to sample the delights of the many pubs and clubs. Getting there is simple, watch out for signs for Solymar Square and you’re nearly there.

Shopping
Benalmadena offers a variety of shopping options. The area has a wide range of large and smaller shops and plenty of weekly markets to choose from. The shopping centre has different stores and shops with popular Spanish brands such as Zara, Mango and Massimo Dutti. The weekly markets are home to many different gadgets, souvenirs and clothes all at great prices.

Sports and outdoor activities
Sports are a major part of the Costa del Sol ‘outdoor’ lifestyle, and this applies to Benalmádena too. There is a seemingly endless choice of world-class golf courses dotted along the coast, several of which are in and around Benalmádena, and the superb climate means that you can play all year round. There’s also the option of hiking in Monte Calamorro, water sports, horse riding, sailing, windsurfing or simply lolling about on a li-lo.

Golf courses in the municipality of Benalmadena

Beaches in Benalmádena
Benalmádena has over 10kms of beach, to the east the beaches are sandy and flat and to the west they are a little rockier. These rockier beaches are popular for fishing, water sports and diving.

Historic Benalmadena
Benalmadena’s history is very much evident today, particularly in the remains of the three watchtowers rooted to rocks overlooking the coastline. The commercial district of Arroyo de la Miel proudly displays an ancient Roman archway, and there is also the famous Benalmádena Castle, which served an important part of the town’s fortifications. In the 1970s, The Municipal Archaeological Museum (Pre-Columbian Art Museum) opened in Benalmádena to house the area’s important historical exhibits including a collection of Neolithic artifacts which pre-date Christopher Columbus.

Here is some useful information about Benalmádena to help you make up your mind as to whether this is the place that you would like to relocate or to invest in property.

Schools
Children are well catered for in Benalmádena with a wide choice of nursery, junior and secondary level schools; private, international and state school, offering the English and Spanish syllabus. The Benalmádena International College is situated in Nueva Torrequebrada, close to Benalmádena, this private establishment opened in 1997. The College offers international education for children aged from 3 to 18 years. And it also provides education for those with special needs.

Transport links
Benalmádena is conveniently located for those arriving by air, just 19kms and a short 15 minute drive to Málaga international airport. You can take the A-7 motorway (toll road) also known as the Autovia del Mediterraneo or the coast road. In additional to the excellent roadlinks, a regular public bus service also connects Benalmádena to the other towns on the Costa del Sol, including Torremolinos to the east and Fuengirola, Marbella, Estepona and even La Linea, where Spain meets the Gibraltar frontier. There is a handy train station at Arroyo de la Miel.

There are 100s of real estate agents on the Costa del Sol but lovespain.com is different. The company was founded by Alexis Aparicio …
and he really does love Spain. His passion for the lifestyle is in his DNA – literally.

Even though Alexis was raised in the UK, thanks to his parents who originate from Andalucía, he was completely immersed in his Spanish culture, language, the warmth of the people ...
Read more

If you have any questions regarding our properties or need a helping hand with the sale of your home, please do not hesitate to contact us. Thanks.

This website uses cookies to improve your experience while you navigate through the website. Out of these cookies, the cookies that are categorized as necessary are stored on your browser as they are essential for the working of basic functionalities of the website. We also use third-party cookies that help us analyze and understand how you use this website. These cookies will be stored in your browser only with your consent. You also have the option to opt-out of these cookies. But opting out of some of these cookies may have an effect on your browsing experience.
Necessary Always Enabled
Necessary cookies are absolutely essential for the website to function properly. This category only includes cookies that ensures basic functionalities and security features of the website. These cookies do not store any personal information.
Non-necessary
Any cookies that may not be particularly necessary for the website to function and is used specifically to collect user personal data via analytics, ads, other embedded contents are termed as non-necessary cookies. It is mandatory to procure user consent prior to running these cookies on your website.
SAVE & ACCEPT